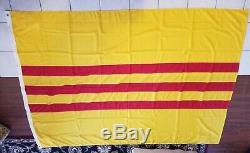 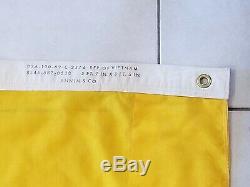 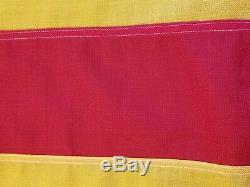 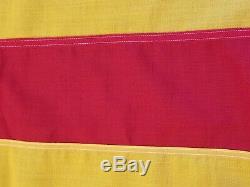 Made in 1969, South Vietnam Flag. Probably one of only a few US Government Issued flags issued during the Vietnam War in this condition that has survived the test of time. This flag was made by Annin & Co. They've been making flags for the US Gov't for well over 100 years. This flag has a DSA (Defense Supply Agency) catalog identification stock and contract number. The DSA number was the catalog and inventory numerical system in use prior to the NSN system that the US Government uses today.

Unfurled the flag is big, measuring 8'5 x 5'7. This flag is heavy weight in terms material and very nice, its professionally made and the quality is obvious.

If you're a Vietnam War collector then this is for you, there aren't a lot of US Gov't issued South Vietnam flags, made by a reputable flag maker, that are in very good condition lying around. Good offers will be considered. The item "1969 SOUTH VIETNAM FLAG Annin & Co DSA contract number Defense Supply Agency" is in sale since Saturday, August 17, 2019.

This item is in the category "Collectibles\Militaria\Vietnam (1961-75)\Original Period Items\Flags & Banners". The seller is "apeman2016" and is located in Boynton Beach, Florida. This item can be shipped to North, South, or Latin America, all countries in Europe, Japan, Australia.