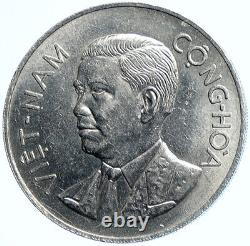 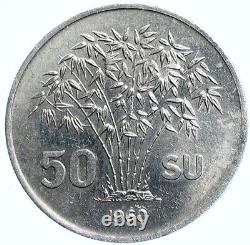 50 SU 1960, Bamboos dividing the face value of the coin. M (3 January 1901 - 2 November 1963) was a Vietnamese politician. M was born into a prominent Catholic family, the son of a high-ranking civil servant, Ngô Ðình Kh? He was educated at French-speaking schools and considered following his brother Ngô Ðình Th? C into the priesthood, but eventually chose to pursue a civil-service career.

He progressed rapidly in the court of Emperor B? I, becoming governor of Bình Thu? N Province in 1929 and interior minister in 1933.

However, he resigned the latter position after three months and publicly denounced the emperor as a tool of France. M came to support Vietnamese nationalism, promoting an anti-communist and anti-colonialist "third way" opposed to both B? I and communist leader H? He established the Can Lao Party to support his political doctrine of Person Dignity Theory.

After several years in exile, Di? I, the head of the Western-backed State of Vietnam. The Geneva Accords were signed soon after he took office, formally partitioning Vietnam along the 17th parallel.

M soon consolidated power in South Vietnam, aided by his brother Ngô Ðình Nhu. After a rigged referendum in 1955, he proclaimed the creation of the Republic of Vietnam, with himself as president. His government was supported by other anti-communist countries, most notably the United States.

M pursued a series of nation-building schemes, emphasising industrial and rural development. From 1957, he was faced with a communist insurgency backed by North Vietnam, eventually formally organized under the banner of the Vi?

He was subject to a number of assassination and coup attempts, and in 1962 established the Strategic Hamlet Program as the cornerstone of his counterinsurgency effort. M's favoritism towards Catholics and persecution of South Vietnam's Buddhist majority led to the "Buddhist crisis" of 1963.

The violence damaged relations with the United States and other previously sympathetic countries, and his regime lost favour with the leadership of the Army of the Republic of Vietnam. On 1 November 1963, the country's leading generals launched a coup d'état with assistance from the CIA. He and his younger brother Nhu initially escaped, but were recaptured the following day and assassinated on the orders of Duong Van Minh, who succeeded him as president. M has been a controversial historical figure in historiography on the Vietnam War. Some historians have considered him a tool of the United States, while others portrayed him as an avatar of Vietnamese tradition.

At the time of his assassination, he was widely considered to be a corrupt dictator. South Vietnam, officially the Republic of Vietnam RVN ; Vietnamese. , was a country in Southeast Asia that existed from 1955 to 1975, the period when the southern portion of Vietnam was a member of the Western Bloc during part of the Cold War. It first received international recognition in 1949 as the State of Vietnam within the French Union, with its capital at Saigon (renamed to Ho Chi Minh City in 1976), before becoming a republic in 1955.

South Vietnam was bordered by North Vietnam to the north, Laos to the northwest, Cambodia to the southwest, and Thailand across the Gulf of Thailand to the southwest. Its sovereignty was recognized by the United States and 87 other nations, though it failed to gain admission into the United Nations as a result of a Soviet veto in 1957. The end of the Second World War saw anti-Japanese Vi?

T Minh guerrilla forces, led by communist fighter Ho Chi Minh, proclaiming the establishment of the Democratic Republic of Vietnam in Hanoi in September 1945. In 1949, anti-communist politicians formed a rival government in Saigon led by former emperor B? A 1955 referendum on the state's future form of government was highly contested and resulted in the deposal of B? I by Prime Minister Ngô Ðình Di?

M, who proclaimed himself president of the new republic on 26 October 1955. After the 1954 Geneva Conference, it abandoned its claims to the northern part of the country and established its sovereignty over the southern half of Vietnam consisting of Cochinchina.

A former French colony and parts of Annam. M was killed in a military coup led by general Duong Van Minh with help from the CIA in 1963, and a series of short-lived military governments followed.

U then led the country after a US-encouraged civilian presidential election from 1967 until 1975. The beginnings of the Vietnam War occurred in 1955 with an uprising by the newly organized National Liberation Front for South Vietnam Vi? Ng, armed and supported by the North Vietnam, with backing mainly from China and the Soviet Union. Larger escalation of the insurgency occurred in 1965 with American intervention and the introduction of regular forces of Marines, followed by Army units to supplement the cadre of military advisors guiding the Southern armed forces.

A regular bombing campaign over North Vietnam was conducted by offshore US Navy airplanes, warships, and aircraft carriers joined by Air Force squadrons through 1966 and 1967. Fighting peaked up to that point during the Tet Offensive of February 1968, when there were over a million South Vietnamese soldiers and 500,000 US soldiers in South Vietnam. What started as a guerrilla war eventually turned into a more conventional fight as the balance of power became equalized. An even larger, armored invasion from the North commenced during the Easter Offensive following US ground-forces withdrawal, and had nearly overrun some major northern cities until beaten back. Despite a truce agreement under the Paris Peace Accords, concluded in January 1973 after five years of on-and-off negotiations, fighting continued almost immediately afterwards. The regular North Vietnamese army and Vi? Ng auxiliaries launched a major second combined-arms conventional invasion in 1975. Communist forces overran Saigon on 30 April 1975, marking the end of the Republic of Vietnam. On 2 July 1976, North Vietnam-controlled Provisional Revolutionary Government of the Republic of South Vietnam and the Democratic Republic of Vietnam (North Vietnam) merged to form the Socialist Republic of Vietnam. World-renowned expert numismatist, enthusiast, author and dealer in authentic ancient Greek, ancient Roman, ancient Byzantine, world coins & more.

Ilya Zlobin is an independent individual who has a passion for coin collecting, research and understanding the importance of the historical context and significance all coins and objects represent. Send me a message about this and I can update your invoice should you want this method. Getting your order to you, quickly and securely is a top priority and is taken seriously here. Great care is taken in packaging and mailing every item securely and quickly.

What is a certificate of authenticity and what guarantees do you give that the item is authentic? You will be very happy with what you get with the COA; a professional presentation of the coin, with all of the relevant information and a picture of the coin you saw in the listing. Additionally, the coin is inside it's own protective coin flip (holder), with a 2x2 inch description of the coin matching the individual number on the COA. Whether your goal is to collect or give the item as a gift, coins presented like this could be more prized and valued higher than items that were not given such care and attention to. When should I leave feedback?

Please don't leave any negative feedbacks, as it happens sometimes that people rush to leave feedback before letting sufficient time for their order to arrive. The matter of fact is that any issues can be resolved, as reputation is most important to me. My goal is to provide superior products and quality of service.

How and where do I learn more about collecting ancient coins? Visit the Guide on How to Use My Store. For on an overview about using my store, with additional information and links to all other parts of my store which may include educational information on topics you are looking for. This item is in the category "Coins & Paper Money\Coins: World\Asia\Vietnam".

The seller is "highrating_lowprice" and is located in this country: US. This item can be shipped worldwide.